It seems as the winter drags on, more and more Bald eagles are showing up here in Madison County.  Most of them are mature with only two immature ones that I have seen.  On cold mornings the eagles can be found roosting near open water or along the road near feed yards.  They feed on dead animals and some times ducks they are able to pick off.  One of the most important food source is the after-birth from lambing and calfing areas.

Many of the eagles do not roost in Madison at night.  They will fly west to Camas National Wildlife Refuge about 60 miles away where 25 to 45 eagles roost together.  There they communicate with each other and when one returns with a full crop, many will follow it to their feeding area the next day.  That is why on some days you will see no eagles and then many will show up a few days later.

Here ar a few pictures of the eagles of Madison County:

Two immature Bald eagles feeding on a duck they harvested and carried up into a tree in the Burton area. 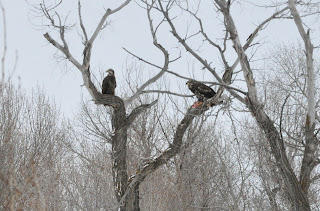 A mature leaving its roost in the Hibbard area on the bank of the South Fork of the Teton River. 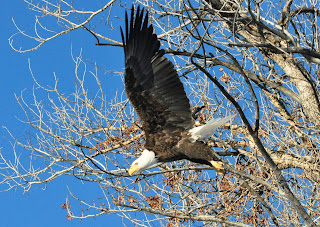 A mature eagle on a very cold morning roosting over a calving area in the Archer/Sunnydale area. 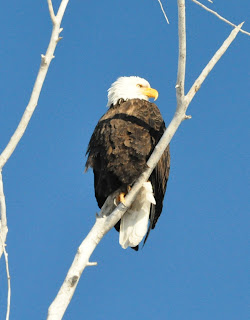 Two matures watching as a flock of geese and ducks feed in a field. 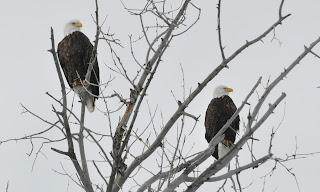 One of the last two leaves the roost to attack the ducks and geese unsuccessfully. 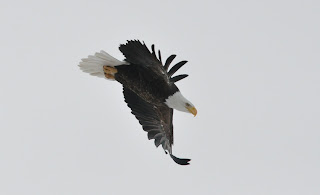 What beautiful birds - our national bird.
Posted by Bill S. at 4:42 AM 2 comments:

Winter is tough on all wildlife here in Southeastern Idaho, but with about 1000 Trumpeter Swan on the Teton and Snake River system, any open water gets a lot of attention.  Often landing on warm creeks are dangerous because of the telephone and electrical lines that run through the area.
This group is resting and feeding on the Henrys Fork of the Snake River. 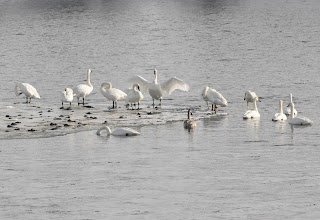 Flashers are placed on wires near feeding areas and flight zones to alert the swans of the wires. 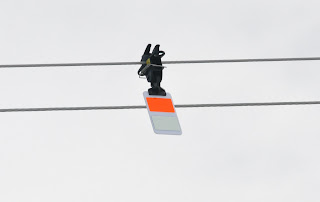 At times when groups of swan looks for water to rest and feed on, sometimes the lead birds block out the danger of the back birds.  Here is a dead Trumpeter that hit an electrical wire over the Texas Slough in the Burton area, probably breaking its neck. 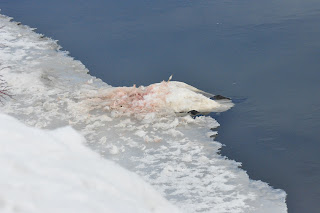 This beautiful bird is flying over the area where the dead swan is laying.  Hopefully it will see and stay clear of all the wires along the slough. 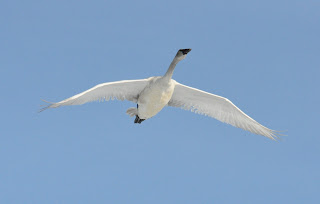 Sunday, February 11, I saw an odd looking flicker in my backyard.  It was different from the Red-shafted ones I have been studying for years in the back yard.  A few photographs and research confirmed that it was indeed a male Yellow-shafted flicker. 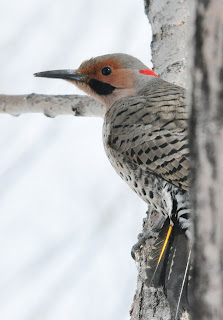 It had the black cheeks instead of red. 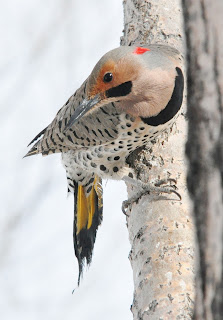 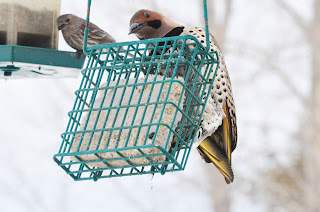