The bird that got me into bird watching was the Greater Sage Grouse, locally called Sage hens.  As a kid I was able to watch the breeding displays of these huge birds only a few times, but loved each experience.  The displays and battles of the males on breeding grounds called leks was always an experience that made my heart race.  Then I grew up hunting these birds a few times.  Mostly I now look forward to late March and early April to watch them.
Here a beautiful male called "Whitey" because of three white feathers on its left side, advertises his availability to area hens. 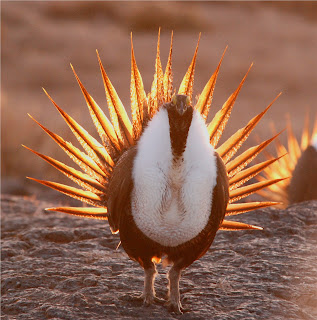 Here Whitey battles the second in command of the lek, Spike. Fighting over girls has invaded all species of animals and birds around the world.  Boys will be boys. 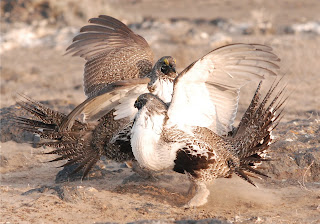 Here a female attempts to entice Whitey to follow through with his advertising.  Females picks the father of her children and Whitey will breed most of the females that come to the lek, up to seven a day. 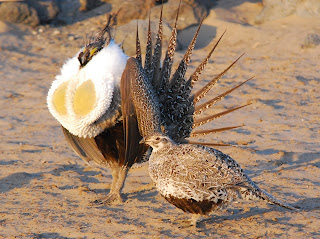 Whitey covers the acceptable female.  She now will fly off, building her nest and hopefully she will hatch out six to eight chicks a few weeks later. 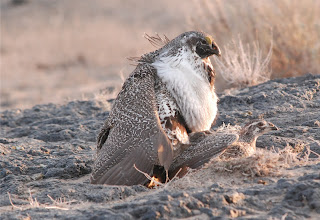 Madison County is not visited by many snow geese because the deep snow usually remains past their migration time.  But we have had thousands fly over already this year and some have even landed on the extreme southwest corner of the county.

But west of Madison County in Jeffereson and Clark Counties upwards of 100,000 will spend two weeks resting and feeding in the open stubble fields and lakes.  Mud Lake, Market Lake and Camas National Wildlife Refuge all have huge numbers of them visit.

During their migration snow geese will be accompanied with a smaller species, the Ross's goose, on the left,  the "Blue phase" Snow in the middle.  I lucked into this photo a couple of years ago in their migration through Jefferson county. 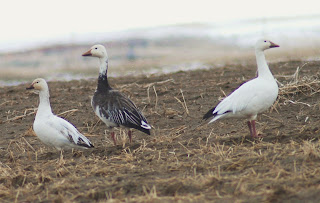 Here is a flock of snows coming into rest on a pond at the Camas NWR as the sun was setting. 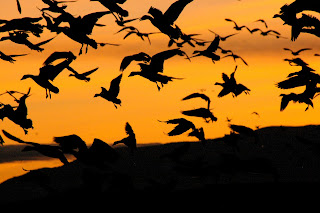 This year some of the flocks of snow geese have had Greater White-fronted geese accompany them in their migration. 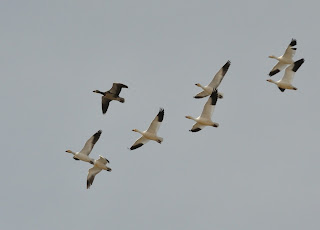 Flocks of over 10,000 will sometimes invade the fields, making one heck of a racket. 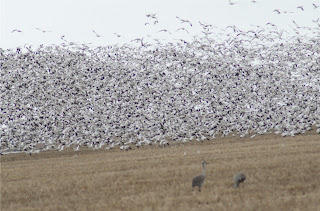 I do wish the snow would leave sooner so more flocks would enjoy the large stubblefields in Madison County.  But at least they visit us.
Posted by Bill S. at 5:09 AM 18 comments:

Last week I saw the first Cedar and Bohemian Waxwings in Madison County.  They were at Beaver Dick Park in a large flock.
Each spring we find them as they in large flocks attacking Russian olives and then they look for water.  Here two Bohemian Waxwings drink while two Cedar Waxwings flank them. 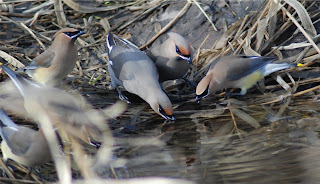 At times they are very active while trying to swallow the Russian olives. 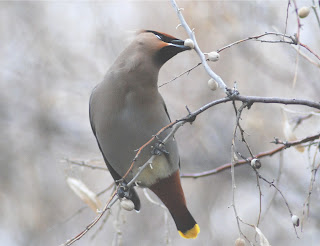 Last summer after the currents in my backyard had matured, the Cedar Waxwings fed heavily on them.  They nested in the fir trees in my yard. 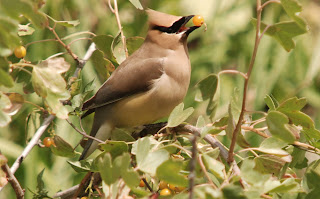 By maintaining nyger seed feeders year around, I now have between 20 to 60 American Goldfinch in my yard year around.  I love these little birds.  They are fiesty and beautiful.  Unlike other song birds, they molt twice a year.  During the winter they are kind of a dirty whitish yellow.  Here they are in winter plumage as they are just starting to get their summer colors on their heads. 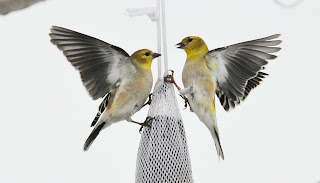 Here a male tries to keep warm as its black cap is just starting to form. 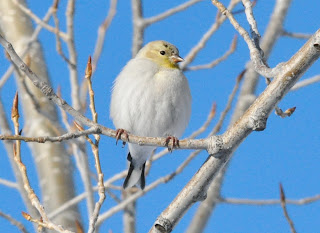 As the spring progresses, their color will become brighter and they will fight more. 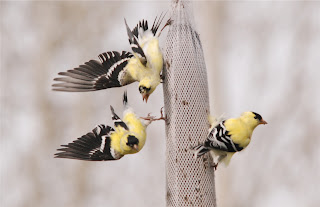 Trying to catch these beautiful birds in flight is always a goal of mine. 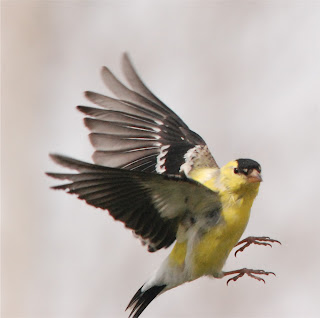 I will add another picture after they are in full summer dress when they get there.
Posted by Bill S. at 8:47 PM 9 comments:

Last Friday and Saturday evenings I was able to locate a reported Great Gray owl near the South Fork of the Snake River in the Sunnyville area.  It was much too dark and the bird was too far away to get some good pictures.  But last fall and the fall before I found these Great Grays also in Madison County. 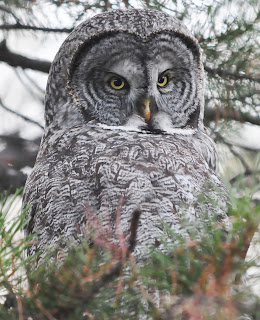 There were a total of nine Great Grays that I located this fall in the Moody Creek drainage.  They would allow be to get close if I would sneak up behind a small tree.
Often times they would fly away, but only a short distance. 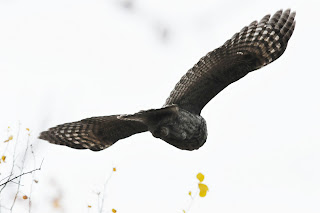 Here one landed in the top of a small pine to watch me. 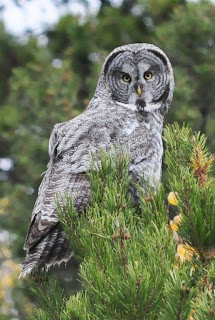 Even while I was snapping pictures, they would be constintly hunting.  The large discs around their eyes allows them to pinpoint rodents over a foot under the snow.  They rotate their feet so their feet is above their head as they dive into the snow.  They are awesome hunters. 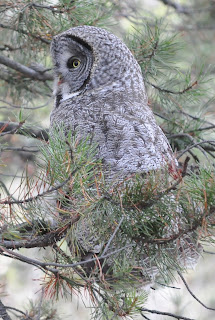 I will keep working this owl that I saw the other day.  The only problem is that it is on private land and I am limited to certain areas to stalk it.  But come summer, I will be looking for nesting pairs in the Moody Creek area.
Posted by Bill S. at 3:59 PM 19 comments: