A flash of yellow and black with a pale blue bill, the male Evening Grosbeak is always welcome in my backyard.  What a wonderful birds as they chirp in the trees above my blind.  Soon he lands on a branch and appears to be wondering what a big black eye is peering at him. 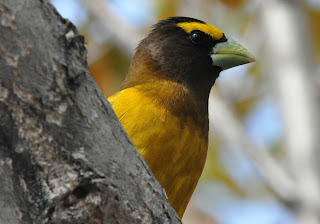 It is amazing to me that their eyes do not move, so they have to turn their head sideways to look at you.  Soon the male is joined by four females.  Not as colorful, but still a beauty. 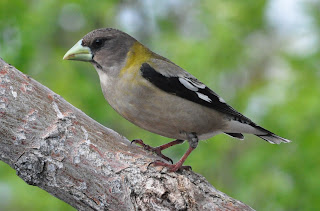 The male and one female joins Cassin's finch and House finch females at the table. 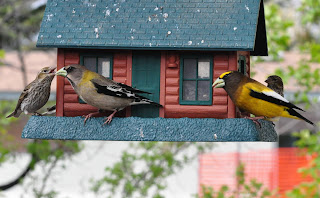 The male leaves the feeder and four females, two on each side start fighting over the sunflower seeds.  One gets knocked off the feeder by the agressive one. 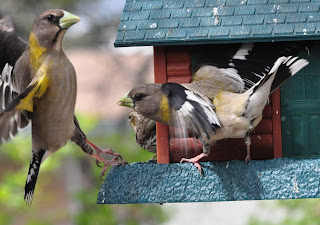 In the meantime, Mr. Evening watches the show and knows soon instead of fighting for food, they will be fighting over him.  Hopefully these will be some that nest in Island Park, just a few miles north of Rexburg. 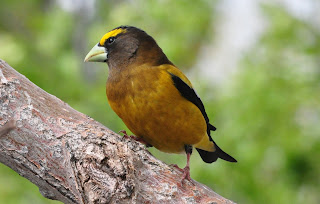 Until they leave, I will enjoy the shows and the colors in my backyard.
Posted by Bill S. at 6:35 PM 21 comments:

The beautiful Trumpeter swan, once almost gone, is a common sight in Madison County.  In the winter from 400 to 600 of these graceful birds stay on the area rivers and nearby fields. 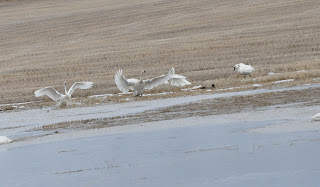 When the snow starts to melt and ponds develop in the fields, others start migrating through the area. 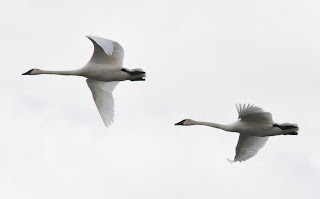 A few will stay on area waterways,pairing up and building nests to raise their young. 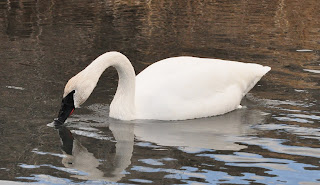 Some waters near Madison County is closed to all human activity to protect the nesting swan. 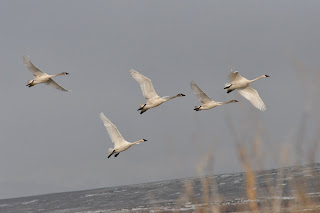 In the fall many of these huge birds will once again migrate for the North Country to invade our waterways to winter. 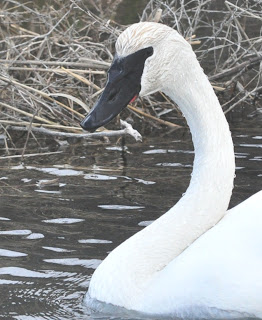 These royal birds inspire and entertain those of us that chose to be outside year around.
Posted by Bill S. at 4:49 AM 21 comments:

I love the Mountain Bluebirds.  One of the first traditions I remember growing up in Teton  Valley was when the first Bluebird showed up, Mom would make us homemade donuts.  We called them Spudnuts, because they were made from water saved over from boiling potatoes.  It was the best springtime treat - almost as good as Christmas.
First the flocks of males would show up, staking out their territory. 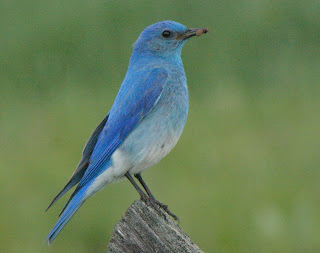 The female join them about a week later and pick out a nesting place.  Boxes are great. 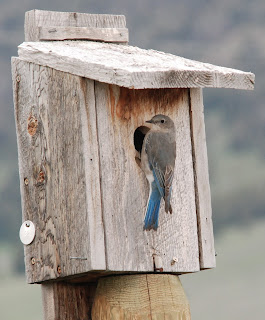 Then the courtship begins - the sly smiles and glances followed by "accidental" bumping and touching.  Finally full blown romance. 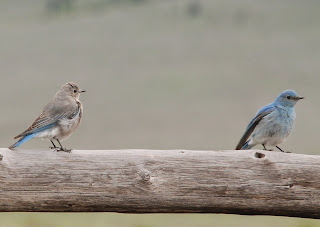 A few weeks later out in a near by tree are two offspring of the two sparkers.  It takes both parent full time to feed themselves and their "teen-agers." 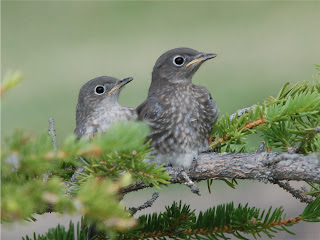 Now being empty nesters, the Mom has time to primp and rearrange her feathers.  They split the nest and she was getting cleaned up for a date. 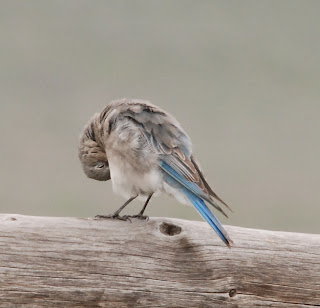 Mr. looked a little lost with her getting ready to go out - without him.  Happens all the time after a males luster fades. 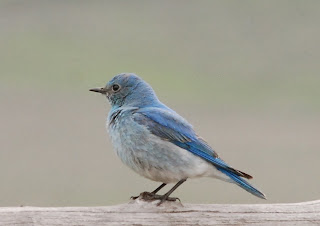 Spring will come again next year and with it new romances and a new coat of brilliant blue duds.  Find a smile.
I know it is fiction, but it sure was fun.  They are still very beautiful and some of my favorites.
Posted by Bill S. at 8:50 PM 28 comments:

Most of the Red-breasted Mergansers have migrated north to nest, but a few remain in Madison County.  Hopefully some will nest here.  I love to watch their ability to move and dive in the water and air.  I never get tired of watching them.  Here two males and a female fly in as they migrate through the area in late March. 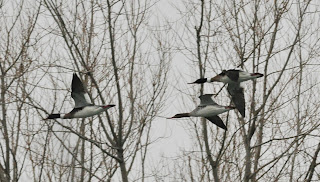 Here a male makes almost a splashless dive to look for food near the bottom of a canal. 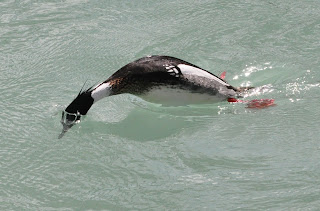 After a dive, this female beats the water off her wings and back as she tries to dry off.  "Use a towel, lady." 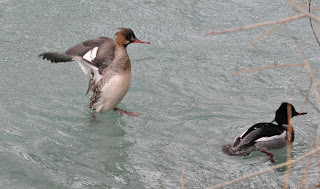 This male almost bit off more than he could chew as he tries to swallow a crayfish that does not want to go down.  The crayfish lost and the bird had "lobster" for lunch. 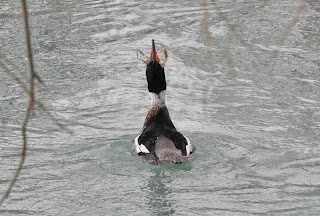 A raft of Red-breasted Mergansers congregate to move to their nesting ground. 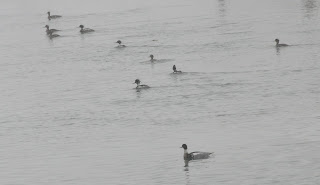 I hope they have a happy flight and make it back this fall and next spring.  My camera will be waiting.
Posted by Bill S. at 5:44 AM 23 comments:

Right now on a pond on the Teton River just outside Rexburg there are 14 Common Loons resting and eating.  What are they eating?  Mountain lobster locally know as Crayfish.  Here one surfaces with lunch. 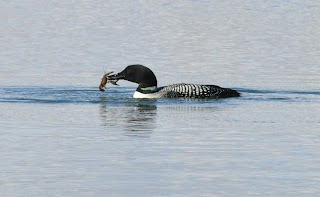 Last week there were 26 to 22 of them working the pond as they rest and prepare to move northward. 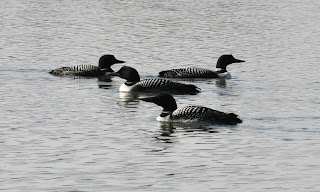 It appears that they have already paired up.  Some will stop in Yellowstone Park where the following were pictured last summer.  They often swim around with their head under water searching for food.  Once food is found, they will dive and may spend at least two minutes under water. 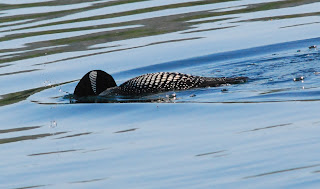 They are a striking black and white with brilliant red eyes. 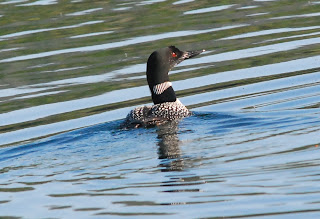 I will continue watching them until they all leave the area.  I wish some would stay and nest near Rexburg, but we do not have a large enough body of water to support them.
Posted by Bill S. at 9:12 PM 16 comments: